Holi is a religious festival celebrated by Hindus all over the world. Holi is considered as second biggest festival on Hindu calendar after Diwali. Holi is also known as festival of Colors.

Places related to life of Lord Krishna are known as Braj regions. Holi rituals in Braj regions – Mathura, Vrindavan, Gowardhan, Gokul, Nandagaon and Barsana – are the most famous one. The Lathmar Holi– the traditional Holi festivity in Barsana is world famous.

Know More About Holi Festival: Essay On Holi In Hindi

In most regions Holi festival is celebrated for two days. The first day is known as Jalanewali Holi – the day when Holi bonfire is done. This day is also known as Chhoti Holi and Holika Dahan. Holika Dahan is referred to Kama Dahanam in South India. The second day is known as Rangwali Holi – the day when people play with colored powder and colored water. Rangwali Holi which is main Holi day is also known as Dhulandi or Dhulendi (धुलण्डी). The other less popular pronunciations of Dhulandi are Dhuleti, Dhulheti.

However many people feel that Holi celebrations are incomplete without wet colors. Wet color is applied on the face and is made on the spot by mixing little amount of water with dry colored powder. More enthusiastic Holi folk mix dry colored powder in full bucket of water to drench complete body in wet color.

Holika Dahan or Chhoti Holi is celebrated a day earlier. On the day of Holika Dahan people burn logs of wood to symbolize victory of good over evil and observe Holi Pooja.

Holi falls in the months of February and March each year. It is a two day Spring festival with the first day called Chhoti or Holika Dahan and the second day called Dhuleti or Rangwali Holi. The festival celebrates sharing and love as well as colors. 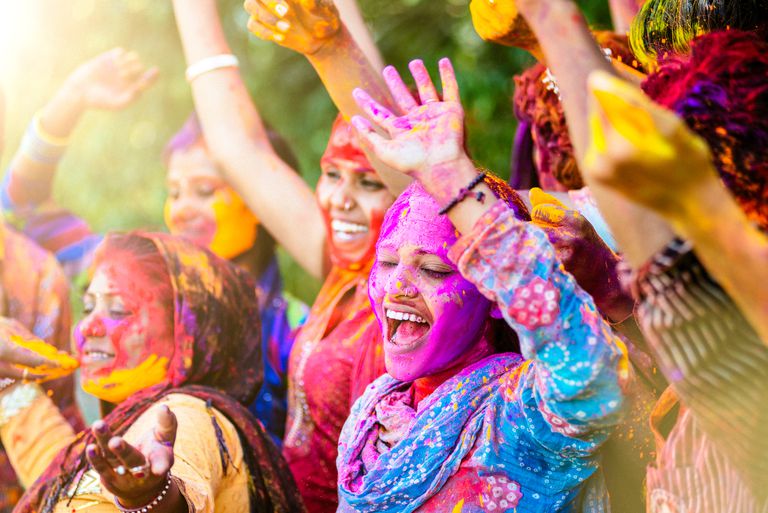 The Timing of Holika Dahan — According to Hindu scriptures, the lighting and worship of the bonfires must be performed at a specific period (muhurta) after sunset on Purnima Tithi (the full moon lunar day), otherwise it will bring great misfortune. Choosing the right muhurta for the Holika Dahan ritual is particularly important, more so than for any other Hindu festival ritual. Ideally, Holika Dahan should be carried out during the auspicious occasion of Pradosh Kaal, when day and night meet (which starts from the time of sunset).

Holi is also known as festival of Colors.

Places related to life of Lord Krishna are known as Braj regions. Holi rituals in Braj regions – Mathura, Vrindavan, Gowardhan, Gokul, Nandagaon and Barsana – are the most famous one. The Lathmar Holi– the traditional Holi festivity in Barsana is world famous. There are different legends behind the festival of Holi like Hiranyakashipu-Prahlad story, Radha-Krishna legend and the story of the ogress (female monster) Dhundi.

Holika Dahan falls on the Purnima (full moon day) of Falgun month as per Hindu Calendar. The festival signifies the victory of good over evil. It is celebrated one day before Holi with proper bonfire. It celebrates the killing of Holika–the sister of Hiranyakashipu. The bonfire signifies the fire in which Holika (Hiranyakashipu’s sister) burnt herself while trying to kill Prahlad.

Rangwali Holi is also celebrated in memory of the immortal love of Lord Krishna and Radha. Once upon a time, Krishna asked Yashoda why he was not as fair as Radha. Yashoda jokingly suggested Krishna to apply color on Radha’s face as it would make her complexion dark too. Lord Krishna, then, played with Radha and Gopis with different colors. Since then, the day is celebrated as the festival of colors.

Throwing Color: One of the most iconic activities of Holi is the throwing of colored water and powder in the streets of India’s cities. This is an exciting activity that is used to show devotion and respect to deities, friends, and family members.

Worship the Idol of Radah: Radha is a Hindu goddess and the lover of Lord Krishna. According to traditional stories, Radah was the first woman to be showered with color as a show of love. To show respect for Radah, many people sing Holi songs and perform plays near the goddess’ idol.

Bonfires: To celebrate the triumph of good over evil during the story of Holika and Prahlad, many people build large bonfires on the eve of Holi. The burning of the bonfires is a joyous activity. Many people use this occasion to dance, sing, and socialize with their friends and family members. This activity is known as Holika Dahan.

Consumption of Bhang: Many festival-goers enjoy Holi by consuming bhang, a treat that is made from cannabis paste. This is traditional treat that is intended to help people relax during the festival.